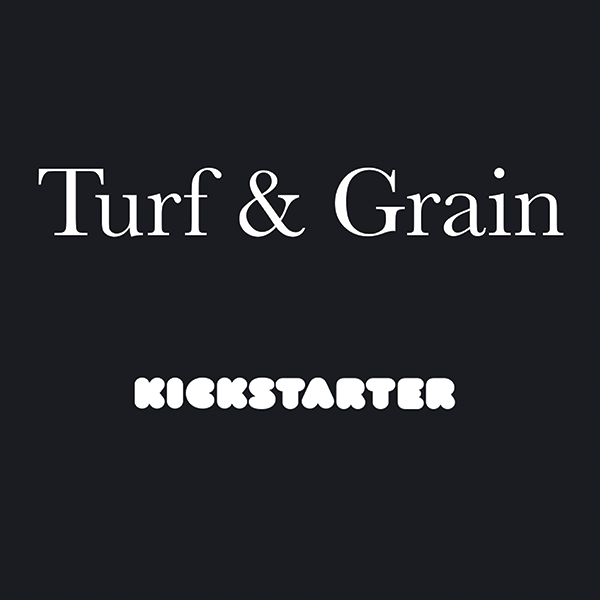 In the months since the release of Issue Four, I have reflected a lot on what Turf & Grain has become, our successes and failures and ultimately ways in which we can improve the project. Lots of people have been asking about what is next for Turf & Grain - and Issue 5 in particular. It feels great to finally be giving everyone a meaningful update!

To cut to the chase - I'm delighted to announce that we will be running a Kickstarter to regenerate Turf & Grain from the 15 August to the 15 September! We will be trying to raise £6,000 and there will be some unbelievable rewards for those who support us.

During my period of reflection, I realised that Turf & Grain needed to change in two ways: To become both more community-driven and financially sustainable to reach its potential. Community is the real goal of our project - to have 30, 40, 50 people an issue contributing in some way to sharing stories, ideas and experiences from across our island. To bring people together and to provide a platform for talent here - be it written, photographic, artistic or otherwise. But the finances have to be sustainable to provide stability for this platform.

While Turf & Grain sells reasonably well, it can take a long time for us to recover the money used to produce our magazine through sales - most magazines use advertising to cover production costs and then the sales add a source of variable income. I don't regret what I have spent, as it is right to pay all our contributors fairly for their work, to produce our magazine on the best and most sustainable stock available and to invest in Northern Ireland and the ROI. However the financial commitment of running a publication has been a lot to bear for me personally, and our current state of cashflow means that I haven't been able to scale the publication up to a stage where we can make issues on a more regular basis.

Turf & Grain has also become too large a project to be done by one person. While we had a great team ethic during the production of each print issue, the responsibility to market and sell the magazine, to organise events, to pack and ship each order, to keep the website up to date, to run our social media and to develop the project all lay on me.

Turf & Grain was my business so I was happy to do it - but when there was so much hunger from all our contributors to see the project work it didn't make sense for me to do it alone, and juggle those responsibilities as well as a full time job. Turf & Grain is a magazine about the people of Ireland - their stories, experiences and ideas. Therefore having more people working on the magazine, collaborating and inputting their ideas and time is both logical and essential (and more fun!).

So as I considered the challenge of how to make the project both more financially sustainable and more community driven, a unique opportunity presented itself.

Why not crowd-fund the project?

Raising £6,000 would provide us not only with the funds to make Issue Five, but to fully regenerate our project. A financial fresh start.

Based on the above figures we would be able to sustainably grow the project - we could have more regular print issues, better pay for our contributors, and meaningful events.

This is where the community aspect comes in. Instead of me making the decisions about how to spend the proceeds from Issue Five, it will now be the decision of a collective. As the funding behind the magazine will no longer belong solely to me we can facilitate a group of people that have enough skin in the game to try and make the project work together.

Rachel and I asked ten friends, some of whom had been involved with the magazine before and some who hadn't, if they would like to be part of the team. We explained the idea to crowd fund and the transition to a community project and fortunately everyone was really excited. We held our first meeting in June and we discussed our plans for the project and how the magazine will work financially before making an action plan for launching our Kickstarter, divvying up the responsibilities between us.

Crowd funding seemed like a crazy idea at first - the amount of work involved, the amount of support we would need to meet our goal. How the dynamic of twelve people with different backgrounds and experience would all work together.

But in the month since our meeting it has been all go - the team organising photoshoots, video shoots, events, rewards for our kickstarter, setting goals and deadlines for each other.

The change is wholesale - Turf & Grain is now a community project. Twelve people working together to share the stories, ideas and experiences of the people of Ireland.

We really hope that you will support us in August.